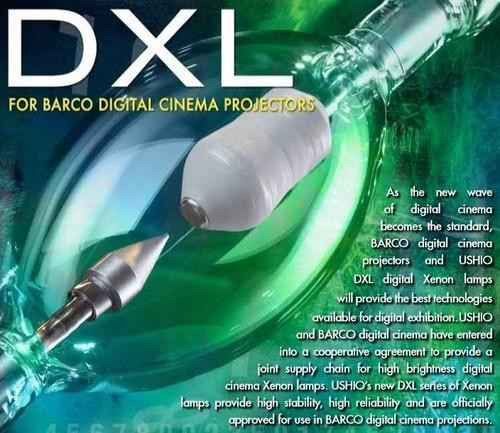 USHIO is one of the largest and most trusted names in the manufacturing of high pressure xenon lamps today. Xenon short-arc lamps boast a spectrum that is closer to natural sunlight than that of any other artificial light source. In addition to commercializing products for search and spot lights, which demand precise, powerful white beam lamps, USHIO became the first in the world to develop a xenon short-arc lamp exclusively for large scale, theater-use movie projectors.

USHIO’s DXL series of digital xenon lamps achieve the highest performance for digital cinema projection. Digital cinema projectors have a more complex optical system than that of film projectors and require lamps with much higher brightness and a more stable arc. USHIO’s DXL series are 20-50% brighter than that of standard lamps of the same wattages. DXL lamps are optimized to meet technical standards especially for digital 3-D screenings.

Sony's SXRD digital cinema systems deliver the best in 4K resolution and at the heart of that performance is the finest quality DXL Digital Xenon lamps from USHIO. The decision to upgrade to 4K is without compromise. So why would you compromise on any lamp that drives the system?

The highest over all performance of 4K digital cinema projection can only be achieved with USHIO's DXL series that were specifically developed for the Sony's SXRD system. USHIO's DXL series, offers superior luminance, high stability, and the ultimate in lamp reliability. Theatre audiences can enjoy the complete visual experience of stunning 4K picture quality and the stable brightness from USHIO's DXL series.

Full USHIO limited warranty. In the event of an USHIO lamp explosion, USHIO will provide full 100% lamp and glass reflector coverage for Sony projectors. The reimbursement will be for the reflector cost as per invoice provided by customer. Reimbursement is subject to factory analysis. 100% Warranty - DXL-20SRX/L - 3000 Hours

This product hasn't received any reviews yet. Be the first to review this product!